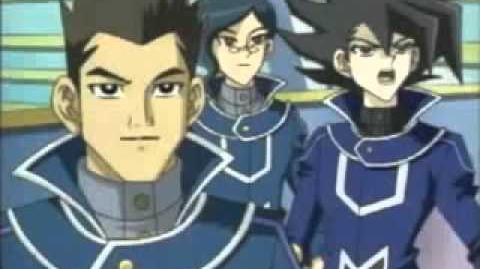 Navy Solider# 1: Okay, so we've assembled all the world military. Now please tell us what this mission is?

Navy Captian: Okay men, prepare yourself. We're headed to deliver is small case of cards in that island.

Syrus: *Jaden' snores can be heard in the background* Dear Slifer, Thanks for granted my wish and making Alexis my girlfriend, but I got another wish; Kill Jaden! He hit me yesterday and he said he gonna do it again today. In fact, oh no, I gonna wake him up now! Jaden, come on, it's time for class.

Syrus: Oh the pain! Man, this is even more disrespectful than when Jaden refused to help out that old lady.

Lunch lady: *pushing a van up a hill* Excuse me, can you help me with this van?

Jaden: (cue zooming and ran past the old lady) No, can't see, bye!

Syrus: Damn it! Things couldn't get any worse, I'm late for exam day and I got bitchslaped by Jaden. What else go to wrong- (syrus fell) *says quickly* Ah crap!) *facefull of concrete from falling* No one say a f**cking word.

Computer: A necessarily large security measures have been made to ensure that these children's card games are safely delivered.

Navy Solider# 2: We're the Navy, Bob. We've got nothing better to do.

Slifer Red Student: Oh my God, this test is hard!

(Everyone cheering on that joke)

Syrus: So, Alexis, your skirt is so low. Let me fix that for you.

Jaden: And your scores are gonna be the same if you don't pay attention, Syrus.

Chazz: Hey, Shut up you non-rich people! Rather than learn anything useful, some of us trying to learn how to be good at card games!

Jaden: Get bent Chazz! You no good money hogging, card loving, big headed, egocentric, small tempered, Ojama humping, butt-munching, asshole. Even I haven't started my exams yet and there isn't a lot of time to-

Banner: Your test is now, over.

Chancellor Sheppard: Hello my students, your Chancellor here! Just to let you know some new cards have arrived at the school. That is all.

Chancellor Sheppard: Also on another note, DarkSide Incorperated had made a new video.

Syrus: NYAH! Man, what a racket. Jaden, wake up!

Jaden: *sleepily* Oh, what is it Syrus?

Jaden: (cue banging on the head on the desk) You're kidding?

(Jaden bangs his head on the desk again)

(Navy Soliders charging to the to the Students)

Everyone: OH MY GOD! WHO WEARS THAT STUFF?!

Navy Captian: The Navy, that's who! Here's your cards!

(Everyone cheering the Navy)

Navy Captian: There are might even be a naked Dark Magician Girl in here!

Slifer Red Student: Hey, where are all the cards?

Cardselling Lady: I'm sorry, but this Generic hooded man took them all.

Jaden: Are you ready Syrus?

Syrus: I don't think so.

Jaden: Well, we gotta do this. On the count of three.

Syrus: Oh my god, this place is deserted.

Jaden: Well done, do you want to point anything else obvious?

Syrus: You're a dick!

Jaden: Hey, do you have any of those really rare cards left?

Cardselling Lady: I'm sorry, all we have left the plot device cards now.

Syrus: Jaden, you may as well take these. You always use these kind of cards at the end of a duel.

Jaden: (whispered to Syrus) Shut up, that's a secret.

Oblisk Blue Student# 1: We tried to get you those cards, we really did.

Crowler: But I have them now!

Oblisk Blue Student# 2: Hey, who's that?

Chazz: Yes it is.

Chazz: Oh, come on. How many more feminine weirdos are there on this Island.

Syrus: The the F**ck are you looking at?! My hair is always blue!

(turning back to Chazz's gang and Crowler)

Crowler: Hmm. Fair enough. (removes his hoody and reveal to them) A-ha! I want you to duel Jaden in the exams with some new cards.

Crowler: That's right, and you can finally have your revenge.

Chazz: Actually, I was planning to avoid Jaden this.

Crowler: GET YOUR REVENGE!!!

Crowler: Chazz is going to beat you, Jaden. And finally get his revenge.

Jaden: I- wait what?

Chazz: *sigh* It's Crowler, Jaden. just not go along with it.

Jaden: What does everybody gasping at?

Chazz: That's the same moves you start every duel of with. Seriously, I've sent more richinality than Whiches two video.

Jaden: That was low.

Jaden: Uh Chazz, I dont' think you're quite allowed to-

Chazz: Okay, instead I summon VW Wing Catapult! Now watch my Brilliant Taunting strategy! Hey Clayman, you're in Defence Mode. You're the wuss of the Elemental Hero World! Come on, go to the Attack Mode, Stop being such a pussy!

Clayman: What did you say?!

Chazz: I said, You're Dead!

Jaden: I'm Dueling you, you fruitcake!

Chazz: well, there's no need for that. I guess you need a lesson in manners...

Chazz: ...And this is the card to do it. The VWXYZ Dragon catapult Magazord!

Chazz: I summon one of the most powerful monsters in the game. And there's nothing, Nothing to do to stop me, Jaden!

Jaden: And now, I use the plot device card; Transcenting wings! If I secrifice my Winged Kuriboh, I win.

Chazz: What?! Where did you get that card that powerful?!

Jaden: At your local gamming store!

Chancellor Sheppard: Congraduation, Jaden. You won the Duel. You're going to be promoted to Raw Yellow!

(turned to the toolshed)

Syrus: Back already? *Gasp*! You came back for me!

Jaden: No, they kicked me out because I kept saying "Get your game on."

Syrus: (crying with tears of joy) OH!! You came back for Me!!