A very new face to the world of anime and an even newer face to video editing and voice acting. Kimmy began in late 2010 and has enjoyed every moment of whatever she's doing.

Known for her voice as Kirino in Bamboo Blade Abridged, Clare from Claymore UNserious, and also as Orihime in TheGoteijusantai abridge of Bleach, she still has a lot of work to do before she qualifies a skilled voice actor like she aspires to be. A lover of music and now beginning a hidden singing channel on youtube, she knows that she still needs some practice. Her video editing isn't as wonderful to her yet but she loves to edit and won't stop. She believes she is still a newbie when it comes to everything and loves to pick up on things from other skilled people that take part in video editing, voice acting, story writing ect. She has also began to do nail art and enjoys knowing that many people love her work even though she is inexperienced. With a knack of getting into trouble and conveying her feelings into whatever she does, she keeps her head held high knowing that as she continues growing and getting experience she will become another popular figure on youtube.

"Life is filled with ups and downs but no matter what, I wouldn't change it for the world." Is her motto and sticks to it

(Note: These roles include projects that have been canceled or on hiatus) 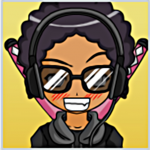